Eimeria spp infection, commonly known as coccidiosis, corresponds to a generalized problem in the poultry commercial industry, since it is impossible to maintain growing broilers without infection from these protozoans (McDougald 2003). Epidemiological studies in commercial broiler operations have shown that a peak in the number of coccidial oocysts in feces or litter occurs at 4 to 5 wk of age (McDougald and Reid 1991). Commercial anticoccidials usually contain antibiotics. As this has become a concern for consumers because of the potential development of antibiotic resistance, poultry growers are looking for alternatives to replace antibiotic-based anticoccidials (Jones and Ricke 2005). The loss of activity of some anticoccidial drugs and the need for alternative control programs for broilers have led to the study of new nutritional strategies. In addition, development of a rapid immune response is a key element in maximizing broiler growth performance (Kocher 2004). In countries like Mexico, where skin pigmentation has market value, coccidian infection has an especially large negative impact on this characteristic. Nutrient immunomodulation, feed additives and maintenance of normal gut flora in broilers are important considerations to obtain better responses than using an anticoccidial drug, and also make it possible to minimize the deleterious effects of coccidiosis (Dalloul and Lillehoj 2005). Similarly to antibiotics added to the diet, mannans have the ability to alter the microbial population in the intestinal tract. This modification seems to be accomplished by the ability of mannans to attach to mannose-binding proteins on the surface of cells of some strains of bacteria, preventing them from colonizing the intestinal tract by interfering in the binding of carbohydrate residues of epithelial cell surfaces (Steen and Nielsen 2000, Qureshi et al. 2000). The purpose of this study was to compare the effect of a growth promoter bacitracin Zn and a mannan oligosaccharide (Saccharomyces cerevisiae) on the performance, oocyst count, intestinal lesions and skin pigmentation of broilers challenged with an Eimeria acervulina infection.

A group of 900 one-day-old commercial male broilers was randomly assigned to three treatments, with six replicates per treatment of fifty broilers each. All broilers had the same basal ration plus feed additives. The treatments were: T1) basal diet plus Nicarbazin (Eco Animal Health Ltd, London, UK), an anticoccidial drug (CD) (120 g t-1) in the starting diet and Salinomycin (Eco Animal Health Ltd, London, UK) (66 g t-1) in the finishing diet. Bacitracin Zn (Alpharma Inc., NJ, USA), an antibiotic growth promoter (AGP) (55 g t-1); T2) basal diet plus coccidian challenge; T3) basal diet plus mannan-oligosacehanides (MOS) (Alltech Inc., KY, USA) 1 kg t-1 on days 1-49, no AGP and CD supplementation on days 15-44. Treatments 2 and 3 were challenged on day 21 with 25,000 sporulated oocysts (E. acervulina) in the feed, per broiler. The basal diet was sorghum-soybean meal formulated to contain 22 % CP, 3212 kcal kg-1 of ME and all recommended vitamins and minerals. The diet was formulated to meet or exceed National Research Council (NRC 1994) nutrient recommendations. All groups were feed xanthophylls on days 35-49 and were subjected to a feed restriction of 12 h per day from day 22 to day 42. Feed intake, body weight and feed conversion ratio were recorded every week. Feces were collected on days 7, 24, 30, 40 and 49. The samples were placed in potassium dichromate until further analysis. The number of oocysts in the feces was determined according to the procedure of Chapman (1992). Briefly, feces samples were weighed on an analytical scale, suspended in 100 ml of water and allowed to soak overnight. The suspensions were then homogenized, 1 mL of sample was diluted in 9 ml saturated salt solution, and oocysts were counted in a McMaster chamber. On day 30, four broiler, 24 per treatment, were randomly selected and coccidial intestinal lesions in duoden, yeyun and ceca were recorded following the 0-4 lesion scoring system proposed by Johnson and Reid (1970). Lesion severity, following a score of 0 (no lesion), 1 (mild lesion), 2 (moderate lesion), 3 (severe lesion) and 4 (extremely severe lesion), was recorded for each broiler. On day 49, five broilers per replicate and treatment were killed to evaluate skin pigmentation. This was done in the fat vein using a Minolta CR300 Chronameter, with the control set to the CIEL *a*b* system (Minolta, NJ, USA.). All data for each variable were analyzed with an analysis of variance using the GLM procedure of the SAS software (SAS 1991). Oocyst counts were log 10 (n+1) transformed before the analysis, and lesion scores were transformed using multinomial transformations. Mean differences were compared with a Tukey test, and the significance level was set at p < 0.05. Lesion scores were compared using the non-parametric Kruskal-Wallis test.

No differences (p > 0.05) were recorded for final body weight and total weight gain between treatments (Table 1). It is important to note that the broilers in the control treatment that were not infected with Eimeria showed symptoms of infection, as it is easy for them to become infected where they are raised on the floor and infections spread easily. No differences (p > 0.05) were found for feed conversion among treatments (Table 1). Differences in oocyst counts (p < 0.05) were recorded with higher values for the bacitracin and MOS treatments than for the control (Table 1). Practically no lesions were observed in the treatments, also no differences (p > 0.05) were found for bacitracin and MOS. There were no differences (p > 0.05) in skin pigmentation, and the b* values (yellowness) were similar (Table 1). Some studies on broilers have recorded a beneficial effect of MOS on gut health and immune function. Dietary MOS removes pathogenic bacteria from the intestinal tract which could become attached to the intestinal epithelium (Newman 1994). Little information is available regarding studies with MOS for broilers challenged with Eimeria spp. Elmusharaf et al. (2007) found no differences in growth performance in a study with broilers fed MOS and challenged with E. acervulina, E. Tenella and E. maxima, but did obtain a lower count of Eimeria spp in broilers fed MOS. In the present study, growth performance was observed to increase with the use of MOS. This difference may be because only one Eimeria spp was used. In a similar study, Stanley et al. (2004) used a yeast culture residue on broilers challenged with Eimeria spp, and found that growth performance improved and the number of intestinal coliforms decreased in broilers fed mannan oligosaccharides. Oligosaccharides containing mannose have been found to affect the immune system by stimulating liver secretion of mannose-binding protein. This protein, in turn, can bind to bacteria and trigger the complement cascade of the hosts immune system (Qureshi et al. 2000). Oyofo et al. (1989a) observed that the adherence of in vitro Salmonella typhimurium to enterocytes of the small intestine of chicks was inhibited in the presence of mannose. Moreover, they found that inclusion of mannose in the drinking water reduced S. typhimurium colonization of the cecum (Oyofo et al. 1989b). It has been demonstrated that coccidian infection negatively affects skin pigmentation (Sturkie 1986). However, there are no reports of experiments studying the effects of MOS on skin pigmentation. In our experiment, the b* values were similar in all the treatments, which means that MOS may help prevent damage to the skin color. A yellow color is strongly associated with food choices, and depends on regional preferences. In Mexico, skin color plays an important role in consumer acceptance of broilers (Castañeda et al. 2005). Our experiments results on skin pigmentation may thus be useful in nutritional broiler programs. They showed that diet supplementation with MOS improved growth performance numerically and the effect on oocyst count in all the treatments was similar. It is probable that the effect of the coccidial challenge was not enough to cause important lesions. Considering the antibiotic growth promoter and the results of this study, it may be stated that it is possible to use MOS instead of AGPs. However, mechanism of how mannan oligosaccharides play a more studies are warranted to elucidate the possible role in improving immunity in broilers. 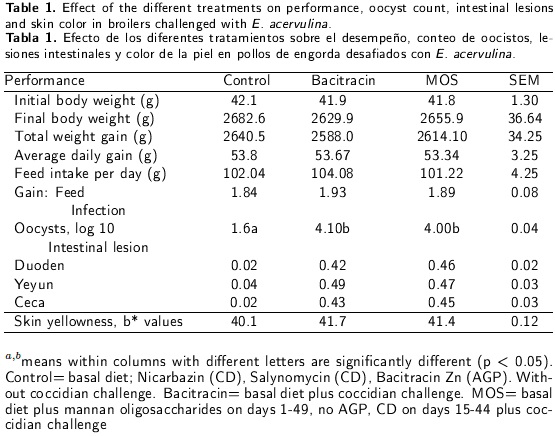